CryptoKitties is an Ethereum blockchain game created by Canadian firm Dapper Labs that allows users to buy, collect, breed, and trade virtual cats. It is one of the first initiatives to use blockchain technology for pleasure and leisure purposes.

The game’s popularity in December 2017 overloaded the Ethereum network, leading it to achieve an all-time high in the number of transactions and severely slowing it down.

The Ethereum blockchain network serves as the foundation for CryptoKitties. CryptoKittys are non-fungible tokens (NFT). Each is unique and held by the user, confirmed by the blockchain, and its value can rise or fall depending on the market. 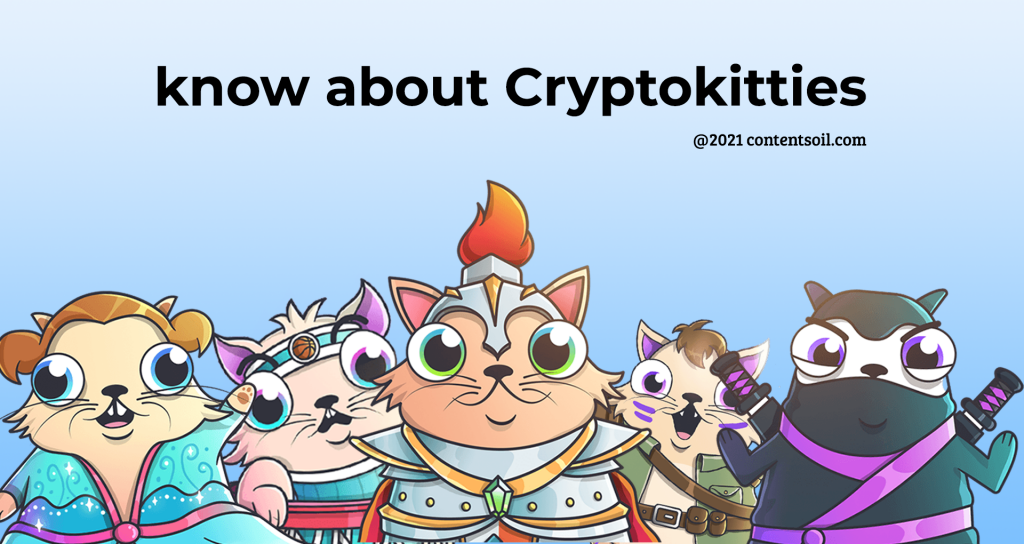 Even the game makers cannot reproduce or transmit CryptoKitties without the user’s consent. Users may engage with their CryptoKitties by buying, selling, and siring (breeding) them. The CryptoKitty art, on the other hand, is not on the blockchain and is instead held by Axiom Zen.

Some of the artwork was published under a new ‘Nifty’ license that allows gamers to use the picture of their CryptoKitty in restricted ways. On October 19, 2017, ETH Waterloo, an Ethereum hackathon, presented a beta version of CryptoKitties. Genesis, the first high-selling cat, was sold for ETH246.9255 (US$117,712) on December 2, 2017.

Is CryptoKitties an NFT?

CryptoKitties from Dapper Labs are seminal NFT crypto collectibles. Though previous collections (such as CryptoPunks) exist, CryptoKitties was the first NFTs to be minted using Ethereum’s ERC-721 token standards, and their popularity soon clogged the network.

What is the purpose of CryptoKitties?

Cryptokitties is a blockchain game that was published in late November 2017 on Ethereum. In the game, players may own, trade, and produce virtual cats, which are represented by non-fungible tokens that fulfill the ERC-721 token standard. Kitties’ characteristics and transactions are stored in the Ethereum blockchain.

Are my CryptoKitties worth Anything?

The Founder Cats are the first 100 NFTs created in the CryptoKitties world. Their ID number determines their worth, and the lower that number, the more valuable the cat is. Virgin cats are thought to be more valuable. One of the Founder Cats, number 84, just sold for more than $64,000.

What fundamentally gives the CryptoKitties their Value?

CryptoKittys are non-fungible tokens (NFT). Each is unique and held by the user, confirmed by the blockchain, and its value can increase or decrease depending on the market. Some of the artwork was published under a new ‘Nifty’ license that allows gamers to use the picture of their CryptoKitty in restricted ways.

The Birth of NFTs?

The CryptoKitties game by Dapper Labs is where the NFT frenzy began. On March 11, 2021, digital artist Mike Winkelmann — better known as Beeple – sold a collage of 5,000 of his works on a non-fungible token at Christie’s for more than $69 million.

CryptoKitties are unique – and lucrative — because they are based on non-fungible tokens, also known as NFTs. Non-fungible simply implies that one token is not identical to another, unlike Ether or other ERC-20 tokens. NFTs are based on a separate standard called ERC-721, which ensures that each token is distinct.

The first NFT collectibles to become popular was CryptoKitties. They were so popular when they were first released that they practically destroyed Ethereum, accounting for 95 percent of all transactions on the blockchain at one time, drowning out nearly all other DApps and spiking the price of Ethereum’s gas transaction fees.

That turned out to be a foreshadowing of the No. 2 blockchain’s present difficulties in meeting the needs of the burgeoning Defi and NFT businesses.

In a broader sense, CryptoKitties was the first Ethereum-based DApp intended towards a broad audience. CryptoKitties, which was unveiled by venture studio Axiom Labs during a hackathon at the ETH Waterloo convention in October 2017 and debuted the following month, was quickly spun off as a new business Dapper Labs.

“We introduced CryptoKitties as a creative and play-driven introduction to what blockchain can accomplish and imply for consumers,” Dieter Shirley, CTO of Dapper Labs and developer of the ERC-721 standard, told VentureBeat in 2018. “By involving the community in fun and activities, we were able to reach a far larger audience.”
Shirley said that CryptoKitties also showed Dapper Labs “where the hurdles and possibilities are.”

It’s a lesson the business has taken to heart as it prepared to collaborate with professional basketball on NBA Top Shots in October 2020. These NFTs, dubbed “Moments,” contain video snippets of huge shots and thrilling maneuvers made on NFTs. According to CryptoSlam, they have received over $675 million in sales and resales.

The platform uses a digital cartoon image that is enabled with backward-compatible animation technology meaning that early non-fungible tokens can upgrade to the movement attributes of newer versions of the digital art.

The images are digital collectibles, or NFT’s that are Non-fungible Tokens held on the blockchain. You own the art you create. You follow a set of rules for digital genes that enable you to select colors and features like tails or eyes and then layer on fun mouths or hairstyles.

Each cat can have eight main attributes and three special ones that are not part of the cat but may offer unique environments or added backgrounds.

To breed a cat for fun is easy. You have to breed for specific traits is more challenging. The player can be a collector, investor, or tech user. The limitless possible outcomes add to the fun and the challenge.

Some cats are NORMAL in appearance, White with blue eyes; others look like a dragon, frog, or space alien. Each user can set their own path to collecting, but the game collects hard-to-obtain traits in breeding or generating certain genes.

It will take you a better part of a year in your spare time to master the process of selecting and breeding traits effectively to compete for Fancy cats. Fancy cats are released monthly and have an exact recipe to attempt to collect from other players.

A player is racing against a clock to unlock the code to breed the cat before the breeding of that cat is locked by the timer. Usually 7-13 days in length. Once it’s locked, that’s it; you can only buy from an existing user as it’s no longer available for breeding.

Then you link up Dapper or Metamask on your computer’s browser and link them to the CryptoKitties site.
Now you are set up and can start accumulating traits in cats you want to collect or breed. To sell or sire, you can offer your own inventory for others to breed with, and that is when it gets fun.

Check it out; it’s a lot more fun than crosswords or sudoku and will play with your brain in new ways.

This is the first report to completely reveal user behaviors in the once-popular blockchain game CryptoKitties and explain the causes for its rise and decline.

We split the CryptoKitties process into four stages based on the number of addresses linked with the game every day: the primer, the climb, the fall, and the tranquility.

We retrieved all five million kitten transactions from the Ethereum blockchain and built the kitty ownership transfer network to characterize user habits. We discovered that a huge number of players invaded the game in the early days but rapidly withdrew and that a few big players eventually seized control of the game.