The ethereum based project started back then in 2017 by larvalabs is one of the examples of crypto collectibles.
As the NFT market became broader in 2021, the prices grew, resulting in several transactions of more than 1 million dollars.

This post will give an in-depth look into the world of cryptopunks and how it is connected with NFT. All you need to know about crypto punks. How did Cryptopunks kick-start the NFT crypto art movement?

What are the Cryptopunks?

Cryptopunks are collectibles, algorithmically created works of digital art. Each has its own trade and distinctive attributes.

CryptoPunks is a collection of 10,000 pictures tokenized as NFTs in the Ethereum blockchain by the software company Larvalabs. An NFT is basically an authenticity of ownership to a digital property, which means you are the only owner of a single-pixel avatar if you are holding a CryptoPunks NFT. 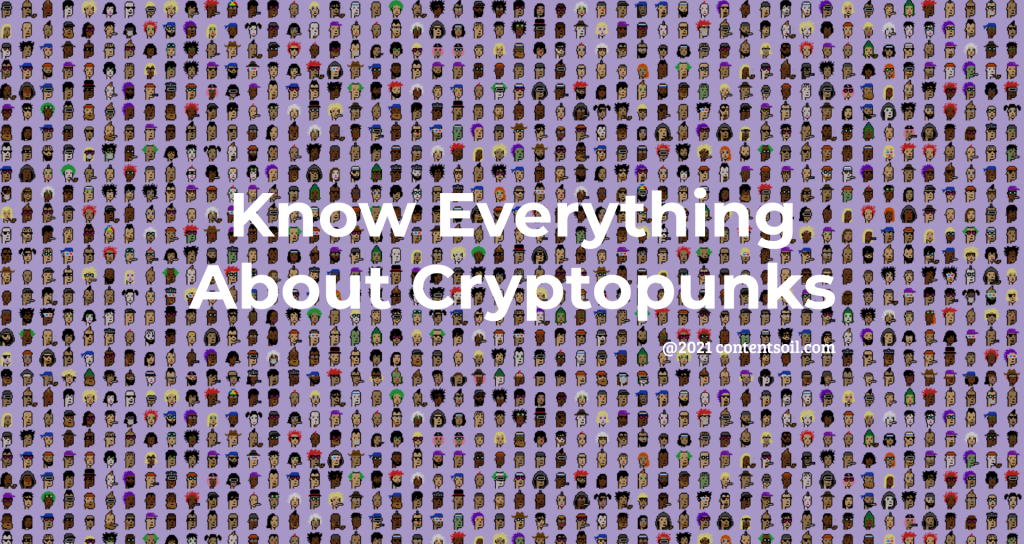 Cryptopunks are randomly generated with various characteristics like people, zombies, apes, and even aliens. The concept of cryptopunks started as an experiment.

Cryptopunks started back in then 2017 at a time when NFT hype has non existed, and at the initial stage given away for free now, it has an enormous amount of value in 2021.

It has gradually become more popular, reached its fame status in 2021, and sold for $7.58 Million.

Cryptopunks are the brain childs of the Newyork-based company named larvalabs founded by matt hall and john Watkinson.

1. Began as an Experiment:

In 2017, the founders of Larva Labs, a software firm located in New York, Matt Hall, and John Watkinson, developed software programs that would produce hundreds of unique, weird characters.

They felt they could have created a smartphone app or game in the first place. The result was a model that changed the paradigm of the digital art market and challenged the ‘ownership’ idea itself.

The CryptoPunks is a 24×24 collection of 8-bit pixel pictures featuring malfunctions and excentricities. There are exactly 10 000 of them, each having a different, randomly created character and their own individual personality.

3. Inspired by the London Punk Scene:

The Cryptopunks project was inspired by the London punk scene. In the early days of the blockchain movement, Halls and Watkinson saw a rough anti-establishment mentality. It was an atmosphere that their Punks sought to reflect on.

The punk movement in London in the 1970s was like the correct aesthetic. Also influenced was the dystopian grit of cyberpunk as characterized by the movies Blade Runner and Neuromancer by William Gibson.

4. Everyone can View the Cryptopunks:

On the website of Larvalabs, there is a composite picture of all 10,000 CryptoPunks. Nobody is able to save a memory stick or hard disc copy of the picture file. Each point also has a separate website, which details its specific characteristics and full transaction history.

5. One Person can Officially Own a Cryptopunk:

Official ownership of each work is specified in an Ethereum blockchain contract in a code characterized by a fan as elegant and wonderfully crafted. This record “is incorruptible and guarantees extraordinary long-lived,” as Larva Labs stated to Christie’s. Each artwork’s history is also kept in the blockchain and documented.

The Hall and Watkinson systems are frequently equated with possessing an item of physical art that is permanently loaned to a public museum. The now widely recognized ERC-721, which laid the foundation for today’s NFT market, also inspired the NFT standard.

6. Some Cryptopunks are Rare:

In addition to the human CryptoPunks, Hall, and Watkinson nodded to the archetypes of popular culture, modified their algorithms to create a scarcer range of fantastic, non-human works by adding to their series 88 zombies with green skins, 24 hirsuteness, and Punks with light blue skins, and nine light-blue aliens.

The non-human punks have various combinations of accouterments, like their human counterparts: one alien, for example, smokes a pipe and has been named the ‘wise alien.’

7. Definitive and Unalterable Collection of Cryptopunks:

Depending on the nature of blockchain, Larvalabs cannot modify the existing range after the project has come live, even though they desire. “It’s strange to think about what might have been different if we had only run the generator once again or used the pre-last run result.”

The creators view every work as separate pieces of generative art and allow for a bigger conceptual work for the entire project. “It is maybe the first artwork that has an autonomous recording mechanism to exchange ownership.”

Once the coins were made, Hall and Watkinson gave them to the CryptoPunks for free while keeping 1,000 for themselves, ‘just in case, it becomes a thing,’ as Hall put it.

There was initially little enthusiasm. Watkinson remembered, “We were starting to think, ah no, this doesn’t really have it.” Punks, on the other hand, were quickly selling for thousands of dollars.

In February, the fedora-bearing Ape Punk, CryptoPunk 6965, sold for $1.5 million for 800 ether. And CryptoPunk 7804 was sold on 11 March 2021 for the equivalent of $7,5 million for the previously stated pipe-smoking ‘wise extraterrestrial,’ the most heavily paid Punk ever. The next day the record was struck.

10. Hall and Watkinson Themselves are Making Their Own Typical Auction CryptoPunks:

Now, hall and Watkinson are making their own auction for a set of cryptopunks they own. Larvalabs has a set of nine cryptopunks from their original collection. With a hoodie, muttonchops, earrings, mohawk, etc.

Cryptopunks has its own profile page, which shows its unique attributes as well as its ownership status. The total value of punks sold last year was $489 Million, and the average value is $53 per crypto punk. Each crypto punks now has a unique value as an NFT form.