Game of Thrones is a great show that is so popular amongst all movie and web series lovers.

The game of thrones leaves a huge remark on everyone, and its characters are more interesting and engaging as we show all of them starting from zero to becoming a huge part of the show.

From Arya Stark to Cersei Lanninster, or from Jon Snow to Daenerys Targaryen, the show amazes the audience with each character.

But the one character that amazes all of us is Jon Snow starting from scratch to becoming a king of night’s watch and then becoming a king in the north. This character surprises all of the audience from the start to the end of the web series.

Well, here are some lessons that we should learn from Jon Snow, the king in the north

10 Lessons to Learn from the Character Jon Snow:

1. Keep some secrets to yourself
2. You should be careful who you fall in love with
3. Appreciate your pets
4. Stand up to bullies
5. Learn to lie when necessary
6. Don’t trust Everyone
7. Help those in need
8. Don’t mix personal and professional life
9. take vows seriously
10. Defy other people’s negative perceptions 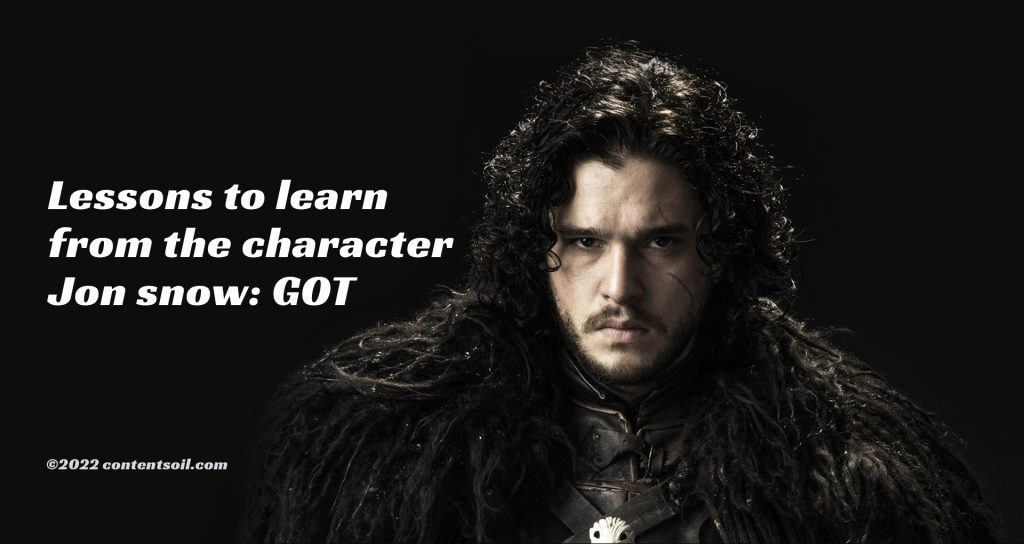 1. Keep Some Secrets to Yourself:

Jon snow is better known to keep some secrets to himself. In the final season, Jon’s trusting disposition continues to backfire. Despite her shrewdness, Jon violates Daenerys’ wishes by revealing the Stark sisters the truth about his background as Rhaegar’s son and heir.

Despite being sworn to secrecy, Sansa promptly tells Tyrion Lannister this information. The knowledge about Jon’s parentage causes disagreement in Dany’s council, eventually leading to her demise. Jon’s honor is great, yet his naivete provides valuable life lessons for viewers to take away.

2. You Should be Careful Who You fall in Love With:

Remember Ygritte and her words, “you know nothing Jon Snow” the ultimate love chemistry between Jon Snow and Ygritte. Love is the only thing in which the character Jon snow makes a lot of mistakes.

The love chemistry of Jon Snow and Ygritte ends during the battle of castle black when Olly puts an arrow in Ygritte’s heart episode watcher of the Wall in season four.

Ygritte isn’t the only one who has passed away in Jon’s arms. After the Targaryen queen destroys the people of King’s Landing, Jon kills Daenerys in a loving hug in the series finale “The Iron Throne.”

During Season 8, the erstwhile King of the North drew the wrath of people when he left Winterfell without his faithful canine companion Ghost. Jon departs with Tormund and the wildlings, ordering his companion to return Ghost to the “real North.”

Throughout the latter seasons, Jon is isolated from Ghost for the most part. When Jon is exiled to the Wall for Daenerys’ murder in the series finale, the two are reunited joyfully.

In the first season of Game of Thrones, Jon forges a lasting relationship with Samwell Tarly. When the previous heir to Horn Hill arrives at the Wall, the Night’s Watch mocks him. Jon confronts the bullies and states unequivocally that such brutality will not be allowed.

Jon’s compassion is a key characteristic that distinguishes him as a worthy leader. From Rast and the mutineers to the Night King himself, the Targaryen heir rescues people from a variety of perilous perils.

5. Learn to lie when Necessary:

Some of us aren’t sure when it’s appropriate to lie and when it’s not. The character Jon snow is the best example that teaches us it is necessary to know when to lie and when not to. Jon’s naivete, unfortunately, follows him to the grave.

In season seven, the King in the North follows Ned Stark’s lead to his disadvantage. By denying to lie to Cersei Lannister about bowing the knee to Daenerys during the dragon pit meeting, Jon jeopardizes everything.

Fortunately, Jon’s unwillingness to play Game of Thrones has no long-term consequences. Tyrion visits with Cersei in an attempt to persuade her to accept the ceasefire. The Lannister queen, predictably, eventually betrays her new supporters.

Jon and Ned Stark have a lot in common, notably a strong yet naïve sense of honor. In season five, this naivete proves to be disastrous. Jon misjudges Alliser Thorne and the other dissatisfied Night’s Watchmen, who assassinate him during a mutiny.

Jon is completely unaware of the Night’s Watch’s hate for the wildlings until it’s too late. Melisandre miraculously revives the Lord Commander, teaching him vital life lessons about trust in the process.

Throughout his time as Rightful Heir of the Night’s Watch, he did a lot of things; Jon makes several daring decisions. By letting the wildlings cross the Wall and providing shelter from the White Walkers.

Jon’s choice is unpopular among the Night’s Watch, and he is killed during a mutiny. Nonetheless, his actions save the lives of numerous Free Folk, who pledge allegiance to him as their leader soon after.

Jon’s friendship with Daenerys is one of his worst mistakes in season seven. Rhaegar’s trueborn son, Jon, is revealed, and the two are unwittingly linked. Furthermore, while the two kings strive to keep their professional and personal lives separate, Jon and Dany’s relationship blurs the lines between business and pleasure.

The Northerners are unhappy with Jon’s choice to renounce his throne and vow loyalty to Daenerys. Winterfell’s inhabitants oppose the Targaryen armies, expressing their desire for independence.

Early in the first season, Jon joins the Night’s Watch. The hidden Targaryen struggles to let go of Winterfell and his Stark family at first but finally commits to life at the Wall, vowing his vows in front of a weir wood tree.

Until his demise in the fifth season finale, Jon keeps his Night’s Watch pledge. The Lord Commander turns down Stannis’ invitation to become Lord of Winterfell and only departs the Wall when Melisandre resurrects him.

Jon had a semi-privileged upbringing at Winterfell, although he is ostracised due to his alleged position as a scumbag. Catelyn Stark had made no secret of her dislike for Jon Snow when he was younger. Catelyn, like the majority of Westerosians, regards Jon as lesser because of his illicit ancestry.

Despite this, Jon climbs through the ranks of the Night’s Watch to become Lord Commander before being proclaimed King of the North. Jon’s success defies the assumptions of others, providing followers with an inspiring life lesson.

Know everything about Retirement Planning