On July 28 2022, Battleground mobile India has banned by the Indian government. Well, there is a thin line between ban and app taken down from the google play store.

Because right now, there is no official statement from Indian authorities regarding the BGMI game taken down from the play store.

On July 28 2022, the Google play store and the app store removed BGMI in India.

On September 2 2020, the Indian government banned PUBG Mobile over data sharing concerns, and after 10 months, on July 2 2021, the authorities of the game came back with an Indian version of the game called battlegrounds mobile India. 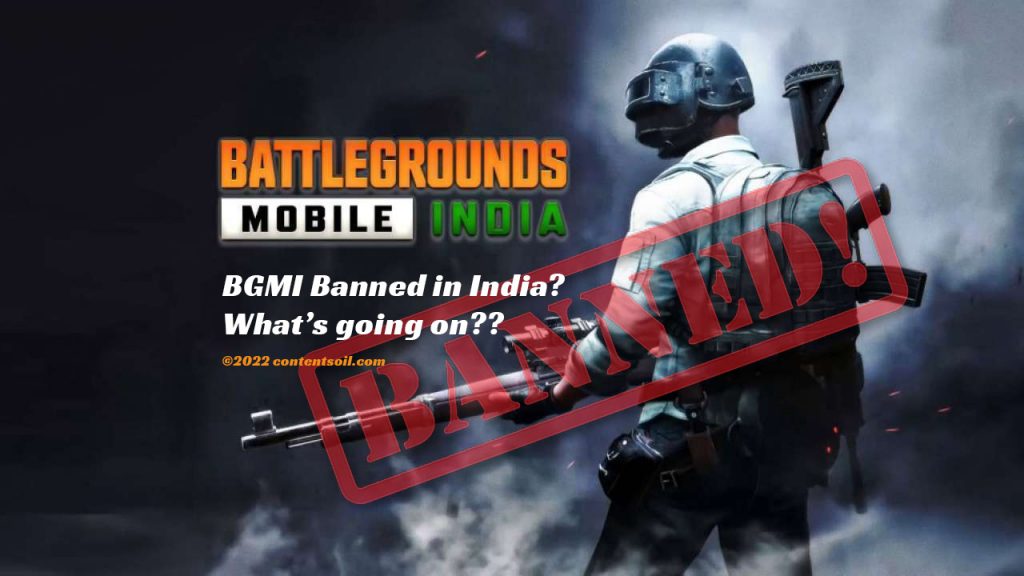 Let’s understand what is going on over here…

The Indian government has banned the PUBG Mobile Global Version because of the conflicts between India and China. This made India concerned about the data-sharing apps that have connections with china, so India has banned several data-sharing app protect the privacy of Indian citizens.

So India has banned a lot of Chinese apps and products by the end of 2020, including the biggest apps like PUBG Mobile’s global version and TikTok.

The problem with PUBG mobile’s global version was the violent nature, addiction, long playing hours by teens, and data sharing. So the Indian government made it clear to the authorities of the game that if they have to relaunch the game in India they need to establish their server in India and make the nature of the game less violent with parental controls and age restrictions.

So because of the huge market in India, the authorities of the game invested more than 100 Million Dollars in relaunching the game as BGMI.

Improvements that have been made in BGMI:

Because of these improvements, the ministry of electronics and information technology gave a green signal to relaunch the game in India as BGMI on July 2 2021.

Now, the question here is why the Indian government ordered the google play store and app store to remove the BGMI.

Well, there are several reasons for this as well,

Reasons Behind BGMI Taken Down from Play Store and App Store:

Several NGOs and Human Resources were demanding a Ban on BGMI

The Child killed Mother Incident over the Game Addiction

On September 2, 2020, the Government of India decided to prohibit the use of PUBG Mobile. Within one hundred and ten months, Krafton reintroduced the game to the market under the name Battlegrounds Mobile India (BGMI). BGMI is the most popular of the Chinese apps that have recently undergone a relaunch and rebranding while maintaining the same set of functionality in order to avoid being scrutinized.

There are reports that not much has changed and that PUBG Mobile has just been rebranded as BGMI in India, despite the fact that BGMI makes the claim that it has resolved the problems that the government had with PUBG Mobile.

Several NGOs and Human Resources were demanding a Ban on BGMI:

Several NGOs and Influenced personalities were asking for a BGMI ban in India because of the violent nature of teens and youth getting addicted to the game and In-app purchases.

This leads the government to pay attention to the game and what exactly is happening with players and the game in India.

The Child killed Mother Incident over the Game Addiction:

The Honorable Rajeev Chandrasekhar, Minister of State for Electronics and Information Technology in the Union of India, drew attention to media reports that suggested a boy killed his mother “while playing PUBG.” Although PUBG Mobile is already prohibited in India, he stated in the Rajya Sabha that it is alarming when prohibited apps appear under new identities. Additionally, he said that the home ministry had received games like this for “inspection”.

You have probably seen accounts explaining how children have spent lakhs of rupees on in-app purchases while playing internet games without informing their parents. Even though BGMI has previously established a purchase restriction in the game of Rs. 7,000, the fact that youngsters “stealing” and spending money on online gaming is a problem for parents in today’s society. Another issue that has just very lately been brought to people’s attention is the fact that young people have begun making financial wagers with their peers based on how well they perform on BGMI and other games. Even though most of the bets are for little value, it is impossible to deny that young people still in school are becoming addicted to gambling.

Indian gaming community will get massive set back if the #BGMI gets a permanent ban as the game sits on most played as well as watched in India. pic.twitter.com/tq9C5tzfTt

Why Is It Crucial To Market Your Business On Twitter